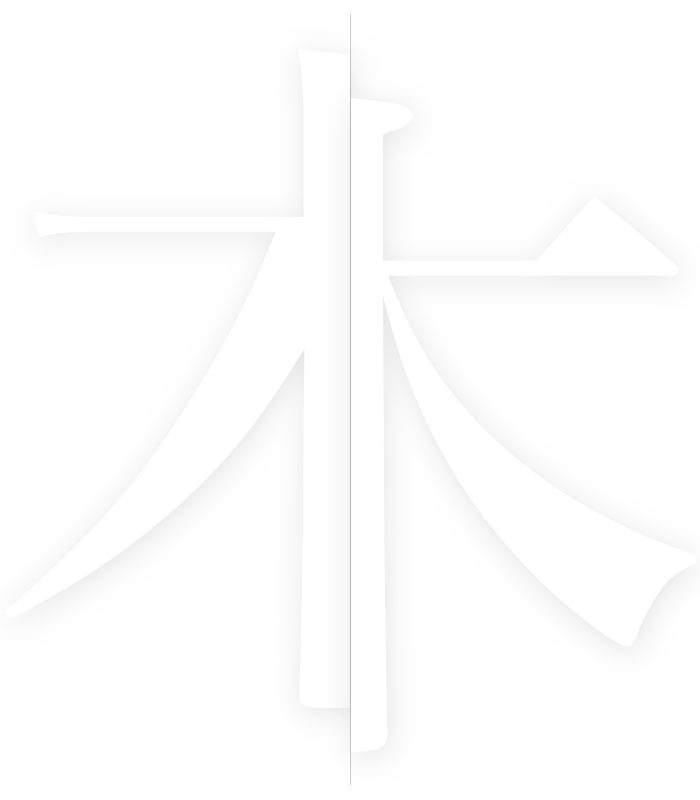 Wood (mu 木), one of the five phases where life takes elemental and material form, is associated with the eastern direction, springtime, the colour green, sourness, morning, and the ability to see...

Wood (mu 木), one of the five phases where life takes elemental and material form, is associated with the eastern direction, springtime, the colour green, sourness, morning, and the ability to see. Since sight is one of the correlations of the phase in question, let us try perceiving wood in a different light, one that brings us closer and deeper into understanding the ecological crisis of deforestation.

Conceptually, wood embodies both growth and constraint. A bonsai tree is an excellent example of this dual signification: not content on simply growing a tree, we constrict and control the size and shape of growth to suit our own ends, aesthetic or otherwise. Vaclav Smil (2019, vii), professor emeritus of the Faculty of Environment at the University of Manitoba, defines growth as “a marker of evolution, of an increase in size and capabilities of our bodies as we reach adulthood, of gains in our collective capacities to exploit the Earth’s resources and to organize our societies in order to secure a higher quality of life.” As our size and capability grow, we are constrained by the material resources necessary to sustain them; growth begets constraint.

Contemporary society relies on wood to grow in order to be harvested for timber, but this reliance is always constrained by the length of time it takes for trees to mature. While it is easy for us to perceive the impact of felling one or two trees for the sake of something like firewood, our relationships to nature have become compounded, entangled through massive changes in the structures of culture and capital across the globe. Research on tree growth is beginning to reveal an important reflection between the element and our contemporary condition: trees are growing fast and dying young (Büntgen et al. 2019).

According to noted sinologist A.C. Graham (1986, 85), within the “conquering” or destructive cycle of the elements, metal (jin 金) “cuts into wood.” We might consider how the character for metal carries connotations of gold and money, and how flows of capital and development affect forested areas across the globe. For example, analyzing trends of “socioeconomic and environmental interactions across distance,” Fuller et al. (2019, 341) find a positive correlation between demand for wood furniture in US markets and harvesting of timber in the Congo Basin in the past two decades; countries neighbouring the sedimentary basin of the Congo River harvest from the richly biodiverse area to export to China where the wood is processed. Unlike the act of felling a tree, understanding flows of globalized demand is anything but clear cut.

To begin to understand the scope of deforestation on a planetary scale is no easy task. In China, one of the largest processing and manufacturing hubs on the planet, cycles of growth and consumption in regards to wood consumption can be traced historically and modelled statistically, showing fluctuations and drastic changes from premodernity to the present era, along with heavy burden during periods of famine and economic pressure (Yang et al. 2018). Some of the first surveys of forest resources after the Cultural Revolution (1966–1976) “found that consumption had [already] increased beyond annual replacement levels” (Vajpeyi and Ponomarenko 2001, 99). “Until 1976 most of the natural resources, including forests, were treated as ‘free goods’” (Vajpeyi and Ponomarenko 2001, 95). While notable research was conducted in the early twentieth century on the effects of deforestation in correlation with soil erosion (Muscolino 2019), the full scale of forest loss was not understood until the 1980s and onwards. Only very recently have we begun to consider how complex factors like biodiversity and forest fragmentation (the transformation of a forest into small isolated patches) interact with one another (Liu et al. 2019). How do these patches—once forests that supported complex ecosystems, felled for growth and consumption before being transplanted with foreign or homogenic populations—see the world around them?

Between growth and constraint, wood also embodies the idea of support. In the generating cycle of the five elements, water (shui 水) nourishes it, while wood in turn dams earth (tu 土). Without the structure of tree roots, complex configurations in specific environments in their own right (Chu et al. 2019), soil is vulnerable to erosion from flooding along with becoming sterile or barren from human activity. As economic growth drives onward and natural resources are strained tighter, how much longer can we rely on the support of the trees?

The trees are painted in carbon black ink, the colour of charred wood. A chromatic tonality that could have been achieved by gradually adding water to the ink is absent. There are no washy passages that slide from black into grey—or, to put it differently, that slide from form into non-form, like the pines transfigured…

Eroded Strata seems like spread-out pages within a book; two panels appear as if bound together with diagonal lines on both sides, drawing attention to the split in the middle. Where white acrylic and dark ink fuse into a gray shade, the surface below the paint seems like time-worn paper. At the bottom of the…